Chris Sloan: Salient Points - Thoughts on the Future of Humanity 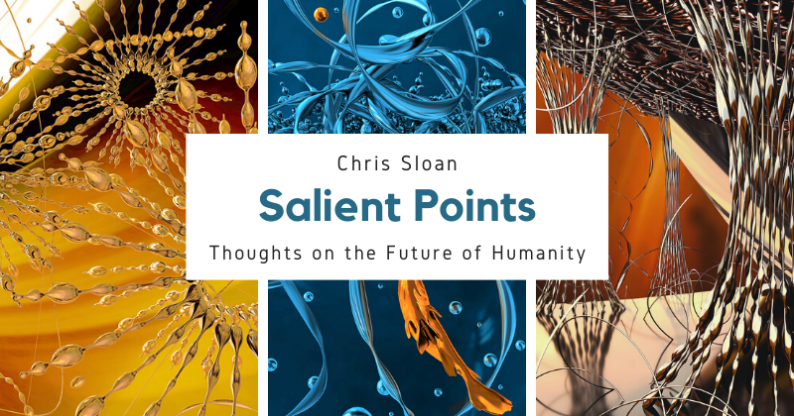 Join the Allegany Arts Council and its Saville Gallery as we welcome local artist, Chris Sloan, for his exhibition, Salient Points: Thoughts on the Future of Humanity, November 7-28, 2020.

Due to the ongoing impacts of COVID-19, no public opening will be held.

Christopher Sloan is an award-winning author and art director who specializes in bringing non-visual scientific research to life for diverse audiences. Mr. Sloan worked with National Geographic Magazine from 1992 to 2010 as Art Director, Senior Editor, and Director of Mission Projects. During this time he proposed many of the archaeology, paleoanthropology, and paleontology stories the magazine produced and played a key role in their successful execution in the magazine as well as in corollary television shows.

Mr. Sloan has written two feature articles for National Geographic magazine, including Feathers for T. rex and Found: Earliest Child, the November 2006 cover story about the discovery of a 3.3 million-year-old baby human ancestor in Ethiopia. His enthusiasm for communicating about science to a broad audience extends to popular literature and children’s books. What Does it Mean to be Human? (2010), co-authored with Dr. Rick Potts, is a companion book to the popular new Human Origins hall of Smithsonian’s National Museum of Natural History. Mr. Sloan also has written seven award-winning children’s books for the National Geographic Society including Mummies (2010), How Dinosaurs Took Flight (2005), and The Human Story (2004). His contributions to books on art, information design, and science include The Art of National Geographic (1999) and Inside/Out: The Diagrams of National Geographic (1998).

As a science communicator, Mr. Sloan enjoys lecturing on visualizing science. He has made a number of television and radio appearances in connection with National Geographic articles. Currently, he serves on the board of advisors of the Exposé Computer Graphics Illustration Annual and as chairman of the Society of Vertebrate Paleontology’s Lanzendorf Paleoart Committee. Mr. Sloan is developing classes on Science Visualization for the Art Academy University in San Francisco. He also owns and operates his own company, Science Visualization.

Sloan was also the previous Executive Director of the Allegany ARts Council, and resides in Cumberland, MD, with his wife and three children. He is an avid arts supporter and passionate about blending art into STEM curriculum for children.

The exhibition is free and open to the public.